Cheenius is here to tell us a tale of parsnip wrangling. Thanks, Cheenius!

As everyone knows, Cheenius loves to make things from scratch — because who wouldn’t want to spend way more time and effort on soup then anyone else in her circle? But, in this case, Cheenius was feeling pretty proud of having grown her own parsnips, and needed to show them off.

You’ll notice the actual parsnips look unlike anything you’ve ever purchased at a grocery store, and more like unmentionable body parts from Jabba the Hutt. Turns out they maybe needed a little more water than Cheenius gave them, which meant they turned woody and cankerous.

[Ed: For purposes of comparison and poking fun at Cheenius, here’s a picture of normal-looking parsnips -] 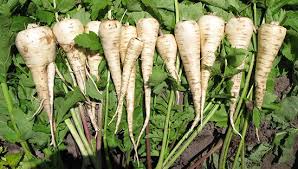 After some research, Cheenius learned that she needed to chop out the middle woody parts, which left her with not much to roast:

Not to worry! The recipe called for a leek, so there was a little more volume in the roasting pan. Phew!

After roasting, simmering, blending the various bits, and then tripling the amount of cream (I mean, c’mon: if anyone appreciates adding dairy it’s Cheenius!), the soup actually turned out quite good:

[Ed: Cheenius did not take a picture of the actual finished product, so the above is a stock photo.]

[Ed: It’s not really a stock photo, it’s from this recipe. Sorry, I cannot resist a pun.]

Mr. Cheenius commented on a certain grittiness to the dish. Evidently Cheenius got a little lazy when it came to actually washing the parsnips, and also doesn’t own one of those vegetable scrubbers (Christmas gift idea, anyone?). Still, they agreed that this could easily be their main go-to root vegetable soup, and extra dirt just means it’s that much more homemade. Here’s the recipe if anyone is inspired (thanks to Marie Taylor for sharing!):

In a food processor, blend soup on low until smooth. Return blended soup to pot; add cream. Bring soup to a very low simmer; season with salt and black pepper; add enough of the lemon juice to cut the sweetness to your deisred level.  Add remaining 1 cup stock to reach desired thickness.

Anybody else have a good parsnip recipe?